An appreciation of depreciation

A key module in TaxBanter’s Tax Fundamentals program is Capital Allowances. There is an array of different thresholds, applicable dates, calculation methods and hidden peculiarities throughout the provisions. Given depreciation deductions are as relevant to large companies as they are to salary and wage earners, an understanding of the legislative intricacies is imperative for every tax practitioner.

Some of these tricks, traps and quirky aspects are outlined below.

From the outset, a deduction for depreciation is complicated by the fact that, for small business entities (SBEs), there are two sets of legislative provisions that could apply. Accordingly the starting point for a depreciation deduction is to determine which legislative path to take: head down the traditional path of Div 40 of the ITAA 1997, or venture down the ever-expanding and mostly more generous road of Div 328 of the ITAA 1997?  The answer depends on both the type of taxpayer and the category of asset.

How many cost thresholds?

In 2001 when the New Business Tax System (Capital Allowances) Bill 2001 was introduced into Parliament, the Explanatory Memorandum promised ‘a uniform capital allowance system that will offer significant simplification benefits’.  That may have been forgotten over time as the combination of Divs 40 and 328, as well as the ATO’s administrative practice, has resulted in seven different cost thresholds.

Medium-sized businesses — a special case
For a medium sized business (i.e. a business with an annual aggregated turnover of at least $10 million and less than $50 million) a transitional rule effectively gives them access to the instant asset write-off for assets costing less than $30,000 until 30 June 2020. Interestingly this transitional rule must be applied; these taxpayers cannot choose whether to write off eligible assets.  See the Banter Blog article New instant asset write-off from 11 April 2019 for more detail.

When looking for tax recognition for expenditure on an asset, especially in the context of an income-producing rental property, determining whether the asset’s cost is depreciable under Div 40, or alternatively written off under the capital works provisions of Div 43 of the ITAA 1997 can be tricky. 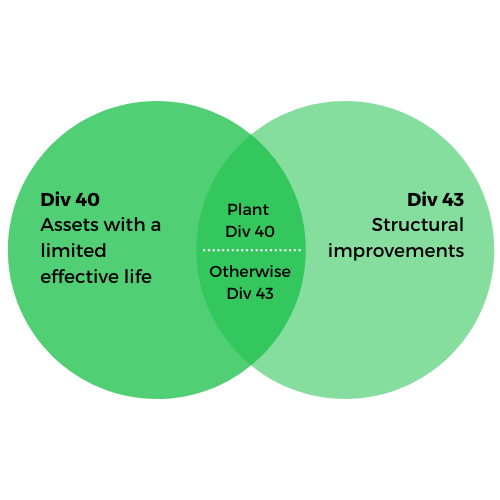 In identifying what constitutes plant, the courts have adopted a ‘functional test’ based on the function that the item performs in the taxpayer’s income-earning activity. That is, if the item:

The rental property will almost always be the setting within which the landlord derives assessable income.1  The extent to which an item that forms part of the premises constitutes plant which is a depreciating asset will be a question of fact and degree.

The Commissioner has identified the following matters as relevant to determining whether an item is plant in residential property:

Relevant guidance from TR 2004/16 on the general principles established by the courts relating to the meaning of the terms ‘articles’ and ‘machinery’ is as follows:

The ATO document Rental properties 2019 contains a number of useful tables that classify residential rental property items as either depreciating assets or capital works. The following table contains examples of some of these items.

Important
From 1 July 2017, individuals (and some other entities) not carrying on a business, are unable to claim depreciation for assets in residential rental properties if they did not hold the asset when it was first used or installed ready for use (consequential changes mean that instead of a balancing adjustment on disposal, a capital gain or loss may arise under CGT event K7).

Transitional rules apply for certain assets acquired prior to 9 May 2017.

One of the interesting things about depreciation is that a seemingly common and relatively simple situation can raise a number of issues. Take the following common example:

On 1 November 2018, Sebastian purchased a new top-of-the-line dual cab ute. After much negotiation, he secured a changeover price for the vehicle of $40,000 by offering his current car as a trade-in. The new car sales contract showed a sales price of $60,000 for the new vehicle and an allowance of $20,000 for the trade-in. Shortly after taking delivery of the new vehicle, Sebastian added various accessories including a tow bar, driving lights and a bull bar. The cost of these items totalled $10,000.

In the 2018–19 income year, Sebastian did not use either his new vehicle or the previous car for work-related purposes.

However, during 2019–20, Sebastian’s employment role changed and he began to use the vehicle for income-producing purposes. Accordingly, he kept a logbook showing a 75 per cent business use.

The cost of a depreciating asset consists of two elements which comprise expenses that the taxpayer has incurred:

The first element includes amounts that a taxpayer is taken to have paid; this would include the trade-in value. As such, Sebastian’s first element of cost would be the changeover price plus the market value of the trade-in, namely $60,000 (i.e. $40,000 + $20,000).

The second element of a depreciating asset’s cost is essentially what is paid for economic benefits that contribute to the asset’s present condition and location. This is worked out after the taxpayer starts to hold the asset. In this case $10,000 has been spent on the various accessories. Therefore, a consideration of whether these composite assets are a depreciating asset in their own right, or part of the car, is needed.

TR 2017/D1 outlines some of the main principles to take into account in determining whether a composite item part of a single depreciating asset or is a separate asset. These factors include:

Arguably the accessories are part of the vehicle and would form second element of cost. In any event, this possibly is the better outcome as the inclusion of these items as part of the cost of the car would result in them being depreciated using the effective life of a car, namely eight years (noting that none of these items are separately listed in the ATO’s effective life ruling).

Another consideration with respect to the cost of the car is the car cost limit. Section 40-230 restricts the first element of the cost of a car to the relevant car limit for the financial year in which the car is first held. The car limit for the 2018–19 financial year is $57,581 (this is also the limit for 2019–20). Consequently, the first element of cost for Sebastian’s car is limited to $57,581.

Notably this limit does not impact the second element of cost.

A depreciating asset starts to decline in value from when its ‘start time’ occurs. The start time is when the taxpayer first uses the asset or has it installed ready for use for any purpose. In this case the start time is 1 November 2018. This may impact the choice of method.

A taxpayer generally may choose either the diminishing value (DV) or prime cost (PC) method. The decline in value under both methods is calculated below to see which option is better for Sebastian.

Calculating decline in value under the DV method

The formula for working out the decline in value for the car under the DV method is:

Although the car has declined in value during the 2018–19 income year, Sebastian has not been using it for a taxable purpose. Therefore, no deduction is available.The decline in value for the car is:

The adjustable value at the end of the 2018–19 income year — i.e. the first year — is however still reduced by the total decline in value of the asset and therefore is:

The decline in value for the car is:

As the car is used 75 per cent for a taxable purpose, the decline in value must be reduced by 25 per cent. Thus, the deduction Sebastian can claim is:

Calculating decline in value under the PC method

The decline in value for the car under the PC method is:

Although the car has declined in value during the 2018–19 income year, Sebastian has not been using it for a taxable purpose. Therefore no deduction is available.

The decline in value for the car is:

As the car is used 75 per cent for a taxable purpose, the decline in value must be reduced by 25 per cent. Thus, the deduction Sebastian can claim is:

Which method should be used?

The choice of method therefore will require a consideration of how long Sebastian expects to both hold and use the car.

2  Paragraph 13 of TR 2004/16. Note that TR 2007/9 provides guidance on when an item used to create a particular atmosphere or ambience for premises used in a cafe, restaurant, licensed club, hotel, motel or retail shopping business constitutes an item of plant.

3  In the first year this is equal to the cost of the car as determined by applying the adjustment for the car limit.