On 5 July 2019, the ATO published a Gazette Notice titled Notice of a Data Matching Program advising that the ATO will acquire overseas movement data from the Department of Home Affairs (DHA) for individuals with an existing Higher Education Loan Program (HELP), Vocational Education and training Student Loan (VSL) and/or Trade Support Loans (TSL) debt. The ATO has published a data matching program protocol which sets out the details of the data matching program.

The new data matching program will be conducted for the 2019–20, 2020–21 and 2021–22 income years. The HELP, VSL and TSL debtor population affected by this data collection is expected to involve approximately three million individuals each financial year. This is an extension of the data matching program, gazetted on 27 September 2017, which is currently being conducted for the 2016–17, 2017–18 and 2018–19 income years.

On 8 July 2019, the ATO issued a media release titled Escape from the country, but not your student loans to alert taxpayers that it will be contacting Australian expatriates to remind them about their outstanding student loan obligations.

Note
HELP was first known as the Higher Education Contribution Scheme (HECS), which was introduced in 1989. The scheme is still commonly referred to as ‘HECS’.

In 2003, there were major reforms to higher education, including significant changes to HECS. These reforms were legislated by the Higher Education Support Act 2003 and came into effect in 2005. Additional loan types were added and the program was renamed the Higher Education Loan Program (HELP). HECS was absorbed into HELP and the scheme is now referred to as HECS–HELP.

Student loans such as HELP, VSL and TSL are income contingent loans because minimum repayments depend on the taxpayer’s income.

Foreign residents are obliged to pay an overseas levy where, broadly, their assessed worldwide income (but not Australian taxable income) exceeds the repayment threshold.

Note
The ATO notes in its media release that, as at 31 January 2019, there were over 3.2 million Australians with outstanding student loan debts, totalling more than $66 billion.

A taxpayer’s repayment income is the sum of their:

The repayment thresholds and rates for 2019–20 are set out in the table below.

The rules relating to the repayment of HELP debts are set out in Part 4-2 of the Higher Education Support Act 2003 (HESA). Similar provisions exist in other legislation governing the other types of income contingent loans.

Compulsory payments are made through the tax return and are taken into account in working out the taxpayer’s amount of tax payable or refundable.

The hierarchy in which a compulsory repayment is applied is as follows:

Note
Taxpayers working in Australia must advise their employer of their study debt. The employer must withhold and remit additional amounts under the Pay As You Go (PAYG) withholding rules to cover compulsory repayments. For taxpayers within the PAYG instalment system, the ATO takes into account a study debt in working out the PAYG instalment amount and rate.

An individual can view their study loan account through their myGov account. The individual can also phone the ATO to request a statement at any time.

Note
No interest is charged on study loans.

The unpaid balance of a study loan is cancelled upon the taxpayer’s death. It is the only debt that does not pass to the estate or to another person following death.

When an individual dies, their final tax assessment may include a compulsory repayment. This amount must be paid from the estate. The remainder of the debt is then cancelled. The individual’s legal personal representative and beneficiaries are not liable for the unpaid amount.

ABC News reported on 14 June 2019 that, under a proposal drawn up by federal bureaucrats in 2017, HELP debts ‘would be treated in the same manner as other government debts such as tax debts’ and recovered from deceased estates.

There are risks associated with the negative reaction from the Australian community to the collection of debt upon death that would otherwise not be payable.

It changes the income-contingent nature of the loan scheme.

Existing debtors took out their loans on the understanding that any unpaid debt would be written off upon death.

Recovering unpaid HELP debts from deceased estates remains a divisive issue in the community, and there is no announced Government position to change the current policy.

Study loan accounts are not provable (i.e. where the creditor is entitled to receive a share of the bankrupt’s estate) under s. 82(3AB) of the Bankruptcy Act 1986. Accordingly, an individual who has been declared bankrupt remains liable for the study debts.

A taxpayer may apply to:

This may be appropriate where:

Individuals who study in Australia, incur a study loan and then move overseas to work, and may not have sufficient repayment income to make compulsory repayments (even though they are earning income overseas). This is because the foreign income of a foreign resident is generally not included in taxable income in Australia.

The Education Legislation Amendment (Overseas Debt Recovery) Act 2015 — which received Royal Assent as Act No. 154 of 2015 (the Act) — created an overseas payment obligation to recover HELP and TSL debts from Australians living overseas. The Act amended the HESA. The rules only apply to foreign residents (s. 154-16(a)).

Note
The legislative references in this article are to the HESA unless otherwise specified. The HESA applies to HELP debts. The Act made equivalent amendments to the Trade Support Loans Act 2014 in respect of an overseas payment obligation for TSL debts.

(Note: The VSL scheme — which is also subject to the data matching program — commenced on 1 January 2017.)

From 1 January 2016, taxpayers with HELP and TSL debts who move overseas for six months or more must notify the ATO.

From the 2016–17 income year, taxpayers with HELP or TSL debts who are foreign residents will be assessed on their assessed worldwide income — their Australian and foreign sourced income — for the purposes of determining whether they meet the repayment income threshold for compulsory repayments (s. 154-16).

From 1 July 2017, affected overseas taxpayers must use a myGov account to lodge their assessment of assessed worldwide income.

In its media release, the ATO sets out the top five destinations for Australians with income contingent loans:

The notification requires the following details:

The individual must also continue to update their contact details while overseas, either through ATO online or a registered tax agent. Another notification will need to be lodged if the person returns to Australia or if their residency changes, but not if they only return to Australia for a short period (e.g. for a holiday).

A taxpayer’s assessed worldwide income is the sum of their repayment income and their foreign resident foreign sourced income (s. 154-17).

Under the law, a foreign resident with a debt must report their assessed worldwide income (s. 154-18(3)).

The ATO only requires the assessed worldwide income to be reported if it exceeds 25 per cent of the minimum repayment threshold.

The taxpayer can report their assessed worldwide income through ATO online services or through a registered tax agent.

Repayments may be in the form of a compulsory repayment or an overseas levy depending on how the assessed worldwide income is made up.

A foreign resident may choose one of three income assessment methods to calculate their foreign resident foreign sourced income. These are set out in the Overseas Debtors Repayment Guidelines 2017, registered on 19 July 2018.

A foreign resident taxpayer is liable to pay an overseas levy that is equal to the difference between:

The ATO has released a Study and training loan repayment calculator to help taxpayers determine the amount of their compulsory repayment or overseas levy.

The calculator can be used for the 2015–16 to the 2019–20 income years. The taxpayer discloses the values for the various elements of repayment income for the relevant income year, and the calculator then works out the estimated minimum repayment.

The following estimate of a compulsory repayment is for the 2018–19 income year for an Australian resident: 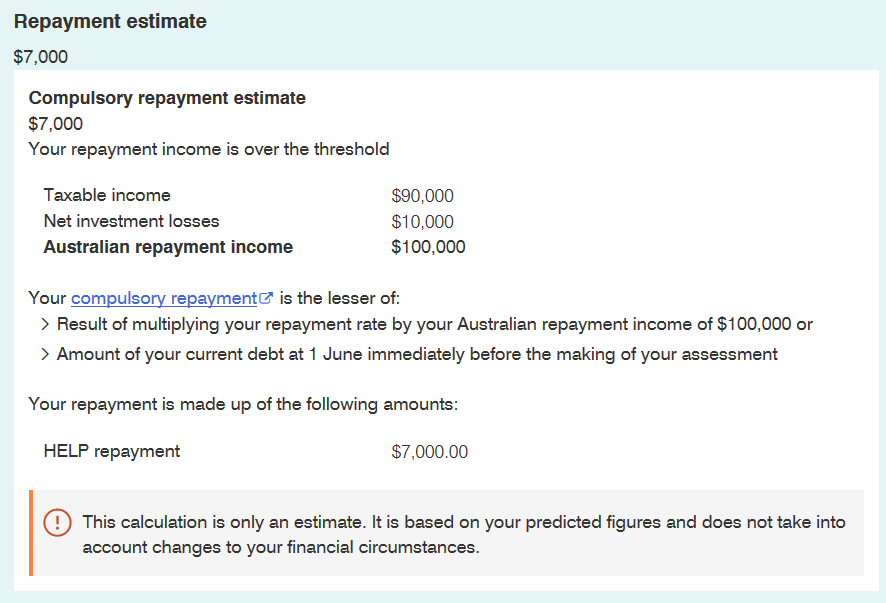 The following estimate of the overseas levy is for the 2018–19 income year for a foreign resident. This individual as the same total income as the resident taxpayer above, except that $85,000 is non-assessable foreign income. 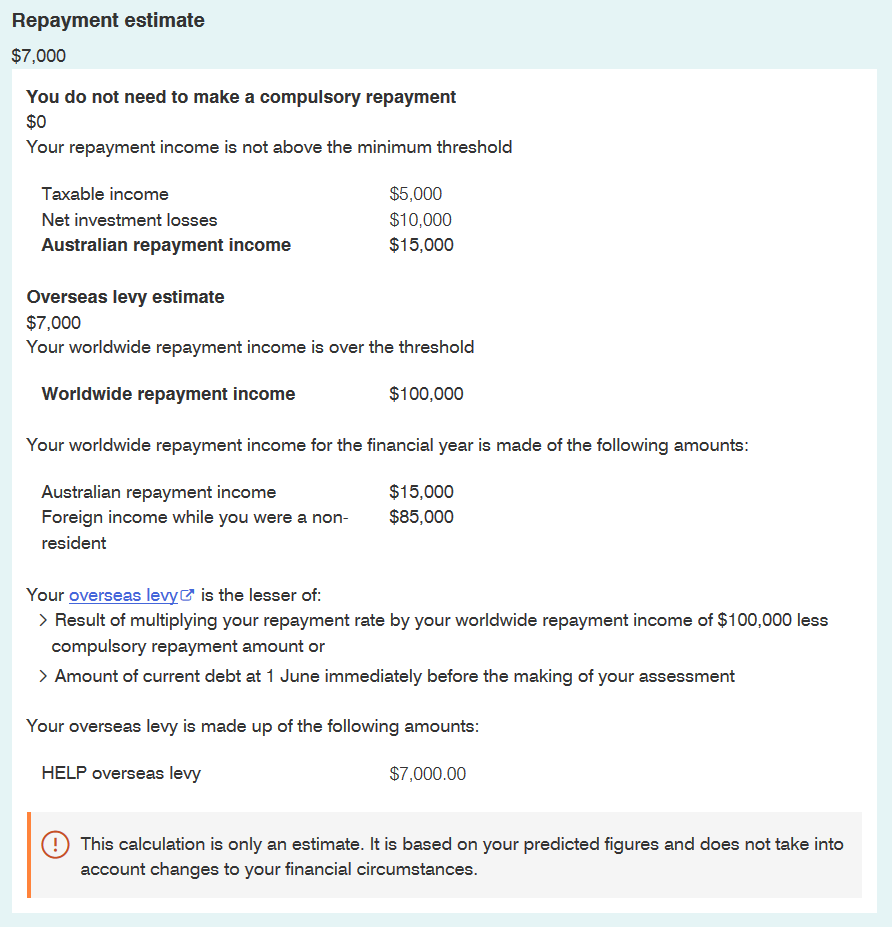 The Department of Home Affairs (DHA) will provide overseas movement data for the HELP, VSL and TSL debtor population, including:

The data will be used by the ATO to identify those HELP, VSL or TSL debtors that have left Australia and remain overseas. The ATO will assess their status against ATO records and other data held to identify debtors that may not be meeting their registration, lodgment and/or payment obligations.

The primary use of the data is to support voluntary compliance through successful targeting of communications and provision of self-help information.

In its media release, the ATO indicates that it will be contacting overseas debtors in the coming months.