The Treasurer’s economic update — $184.5b deficit

On 23 July 2020, the Treasurer handed down the Government’s Economic and Fiscal Update July 2020 (the Economic Update) setting out the economic impact of the COVID-19 / Coronavirus crisis in Australia during 2019–20 and into 2020–21.

The Economic Update only provides forecasts for these two income years. The Government will provide forecasts and projections over the forward estimates period and medium term in the 2020–21 Federal Budget, which is scheduled to be handed down on Tuesday 6 October 2020.

While the Economic Update does not contain any previously unannounced policy measures, the Government is extending the deadline to apply for the early release of up to $10,000 of superannuation to 31 December 2020 (from 24 September 2020).

This article outlines the key economic indicators and forecasts revealed in the Economic Update.

The pandemic is causing the largest contraction in global economic activity since the Great Depression in the 1930s. Australia has not been immune and has now entered into recession. This section sets out some of the major indicators of the economic impact of the crisis.

The Australian economy has been pushed into recession with two consecutive quarters of negative GDP growth. Real GDP is expected to have fallen by 7 per cent in the June 2020 quarter, the largest quarterly fall on record. This follows a 0.3 per cent decrease in the March 2020 quarter, which was affected by the bushfires throughout Australia as well as COVID-19 factors. Activity is expected to pick up in the September 2020 quarter and beyond, with the easing of COVID-19 restrictions in most of Australia. 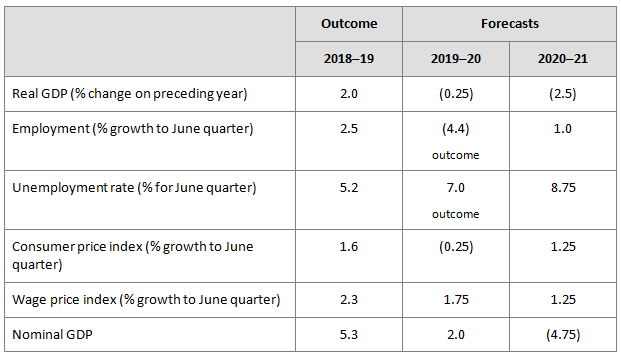 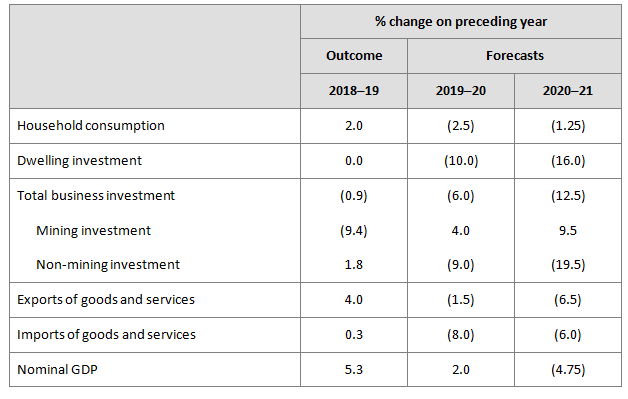 Since the 2019–20 MYEFO, tax receipts have been revised down by $31.7 billion in 2019–20 and $63.9 billion in 2020–21. The downgrades are largely driven by the impacts of the pandemic, related restrictions reducing taxable incomes and GST collections, and the Government’s policy response (including tax measures to support businesses). 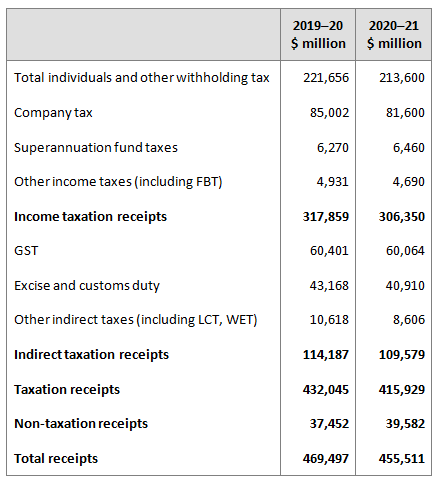 In its COVID-19 economic package, the Government has provided $289 billion in fiscal ($164 billion) and balance sheet ($125 billion) measures, equivalent to around 14.6 per cent of GDP.

Payments made in respect of the JobKeeper Payment scheme have so far totalled $30.6 billion over the JobKeeper fortnights to 21 June 2020. It is estimated that the total cost of the scheme — including the recently announced proposed extension to 28 March 2021 — will cost $85.7 billion over 2019–20 and 2020–21.

The unemployment rate is forecast to peak at 9.25 per cent in the December 2020 quarter. The rate is expected to gradually decline from the start of 2021 to be around 8.75 per cent in the June 2021 quarter.

The Government estimates that its COVID-19 response package lowered the peak of the unemployment rate by 5 percentage points, preventing the loss of around 700,000 jobs.

The global economy is forecast to contract by 4.75 per cent in 2020. It is expected to expand by 5 per cent in 2021 due to the easing of restrictions. However, most major economies are expected to remain below their pre-COVID-19 levels of activity until at least the end of 2021. All of Australia’s top 10 trading partners, with the exception of China (which accounts for around one-third of Australia’s major trading partner basket), are expected to experience a contraction in GDP in 2020.

Despite the enormous negative impact of containment measures in Australia and the current outbreak in Victoria, the Government expects that the Australian economy will perform better than all major advanced economies in 2020. This is in part due to an expected growth in China’s GDP.

According to the International Labour Organisation, the decline in hours worked worldwide between the December 2019 and March 2020 quarters equated to 185 million full-time jobs. A further decrease of the equivalent of 480 full-time jobs is estimated to have occurred in the June 2020 quarter. Around the world, including in Australia, women, young people and low-skilled workers have been disproportionately affected as they feature heavily in the sectors most impacted by containment measures, e.g. tourism and hospitality.

For more on the latest legislation changes, join us for our monthly tax updates, hosted by some of Australia’s leading tax experts.

We facilitate these online and in locations across Australia (in line with current COVID-19 restrictions).