Franking considerations for base rate entities

The corporate tax rate for companies that are base rate entities (BREs) will be progressively reduced to 25 per cent by 2021–22. Companies that are not BREs are taxed at 30 per cent. In the first stage of the tax cut package, the rate for small business entities — with an annual aggregated turnover of $10 million — was reduced to 27.5 per cent in 2016–17. The BRE concept was introduced with effect from 2017–18, and the 27.5 per cent rate was extended to eligible companies with aggregated turnover of less than $25 million.

What is a base rate entity?

Under s. 23AA of the Income Tax Rates Act 1986 (ITR Act), a company is a BRE — and subject to the lower tax rate and lower maximum franking rate — if it satisfies the following conditions:

BREPI — as defined in s. 23AB of the ITR Act — includes seven types of assessable income: corporate distributions (other than non-portfolio dividends); franking credits on those distributions; non-share dividends; interest; royalties; rent; a gain on a qualifying security; and net capital gains.

The maximum franking rate is not determined by reference to the rate at which the underlying profits were taxed in the prior income year in which the profits were actually derived, nor to the company’s BRE/non-BRE status in that prior year. 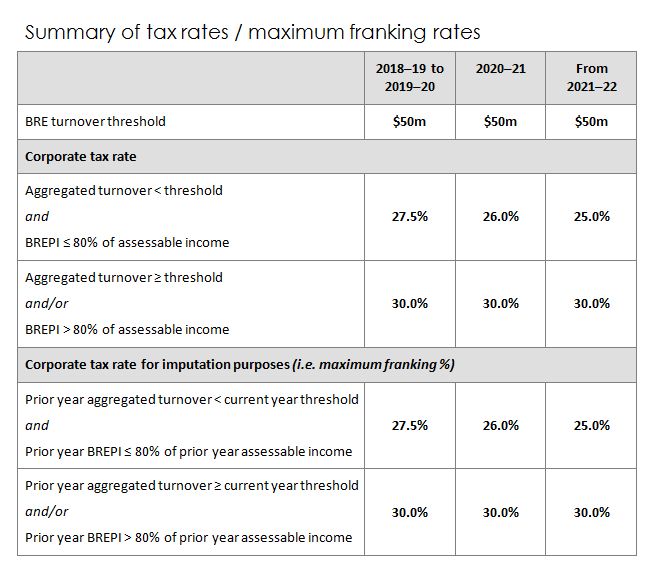 A company that paid tax at the rate of 30 per cent in a prior income year will have credited its franking account by $30 for every $100 of taxable income.

From 1 July 2020, the maximum franking rate for a BRE will drop to 26 per cent. Consider a situation where the company is taxed at 27.5 per cent in 2019–20. If those profits are paid out in 2020–21, the maximum franking rate for the company would be 26 per cent. This would result in some of the franking credits (i.e 2019–20 corporate tax paid) being trapped in the franking account and unable to be passed onto the shareholders (assuming there are no retained untaxed profits to which excess franking credits can be attached).

The same issue will arise when the corporate tax rate for BREs reduces to 25 per cent on 1 July 2021.

There are multiple options for companies to deal with the issue of decreasing maximum franking rates. Some of these are briefly discussed below.

To prevent franking credits from being trapped, a company could pay distributions to shareholders by 30 June 2020 franked at the maximum 27.5 per cent rate.

Also consider that where a fully franked dividend is paid to a non-resident shareholder, there is no dividend withholding tax payable and the shareholder is not assessable on the dividend in Australia (and cannot utilise the franking credits) — i.e. the corporate tax paid is the final tax on the profits underlying that distribution (although the shareholder may be subject to further taxation in their country of tax residence).

Making a distribution to another company

The company may have a corporate shareholder (other than in the capacity as a corporate trustee).

The company may choose to retain its profits, perhaps for non-tax reasons. Here are some brief comments in relation to distributing the profits in future years and the utilisation of the trapped franking credits.

In future years, the company may be able to utilise the trapped credits if it can generate profits that are subject to exemption or concessional treatment, such as:

Distribution when business ceases in a future year

The shareholder may wish to retain the profits in the company until the business ceases operations.

Assuming that the aggregated turnover in the income year prior to the distribution year is less than $50 million:

Join us at the beginning of each month as we review the current tax landscape. Our monthly Online Tax Updates and Public Sessions are excellent and cost effective options to stay on top of your CPD requirements. We present these monthly online, and also offer face-to-face Public Sessions at 18 locations across Australia. Click here to find a location near you.

These are only a few of our Public Session options. Click here to find a location near you.

^We will move these sessions to online delivery in the case of restrictions or safety concerns. Your safety is of utmost importance to us.

We can also present these Updates at your firm (or through a private online session) with content tailored to your client base – please contact us here to submit an expression of interest or visit our In-house training page for more information.

Our mission is to offer flexible, practical and modern tax training across Australia – you can view all of our services by clicking here.

*This section was revised on 19 July 2021 to reflect our latest training sessions.