As part of its Economic Stimulus Package in response to COVID-19, the Government temporarily expanded access to the instant asset write-off (IAWO), under which businesses can claim an immediate deduction for certain expenditure incurred in relation to new depreciating assets and second element costs. The amendments contained in the Coronavirus Economic Response Package Omnibus Act 2020, which received Royal Assent on 24 March 2020, increased the asset cost threshold to $150,000 (from $30,000) and the aggregated turnover eligibility threshold to $500 million (from $50 million) for eligible expenditure incurred from 12 March 2020 to 30 June 2020.

Businesses that have decided to defer asset investments until later in the year when the COVID-19 restrictions have lifted — and would not have acquired the asset by 30 June 2020 — may now benefit from the six-month extension. These businesses will be able to claim the IAWO for eligible assets in their 2020–21 tax returns.

However, while this of course applies to small business entities (SBEs) in relation to acquisitions of new assets, the temporary rules relating to the deduction of a general small business pool year end balance have not been extended beyond 30 June 2020.

Note that an SBE with a substituted accounting period (e.g. a subsidiary of a foreign parent entity) that ends between 1 July 2020 and 31 December 2020 will be able to utilise the $150,000 threshold for its pool balance deduction for its current income year.

Summary of the IAWO

The IAWO is available for both new and second-hand or used assets first used or installed ready for use within the relevant timeframe.

Note:
A significant feature of the temporary $150,000 is that this will enable businesses to immediately deduct the full cost of most business-related motor vehicle purchases, including luxury cars. While many makes of vehicles could certainly qualify for write-off under the previous $30,000, almost no vehicle purchases will be eligible once the threshold reverts to $1,000 on 1 January 2021.

SBEs may choose to depreciate assets using the pooling rules in Subdiv 328-D of the ITAA 1997 instead of claiming depreciation on individual assets under Div 40 of the ITAA 1997. The general small business pool is depreciated as though it was a single asset. Importantly, an SBE must choose to either apply all of the SBE depreciation provisions under Subdiv 328-D or use the normal  depreciation provisions under Div 40. This means an entity cannot use  the IAWO under Div 328 without using the pooling rules.

The method for calculating the closing pool balance is illustrated in the following example. For these purposes assume that all assets are used 100 per cent for taxable (business) purposes. 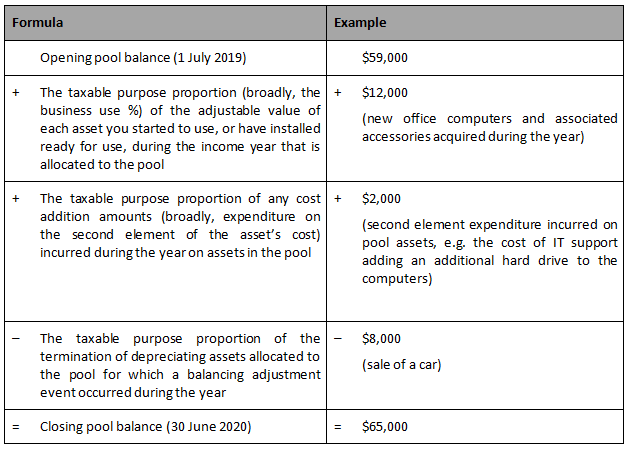 Cars – the interaction of pooling and IAWO rules

Consider the following two scenarios as extensions of the above example.

However, if the replacement car is not purchased, or not used (or made ready for use), until after 31 December 2020, then the car will be added into the pool in the relevant income year. Within the pool, it will be depreciated at 15 per cent in the year of acquisition and at 30 per cent in subsequent income years.

Opting out of the pooling rules

An entity may opt out of the Div 328 simplified depreciation rules. The consequences are:

The Explanatory Memorandum (at para. 4.39) confirms that for SBEs that have not adopted a substituted accounting period, the temporary suspension of the lock-out rule is extended to 30 June 2021.

However, if the taxpayer opts out in 2020–21, it will not be able to opt back in for five income years. This is because s. 328-180 of the Income Tax (Transitional Provisions) Act 1997 (the IT(TP) Act), in applying the lock-out rule in determining whether a taxpayer is eligible to re-enter simplified depreciation in any year after a year that includes 31 December 2020, all years before that year should be disregarded.

Note that the lock-out rule does not prevent a taxpayer from opting back into the rules in 2019–20 or 2020–21 if they previously opted out within the last five years.

Div 40 for SBEs – accelerated depreciation but no IAWO

Where an SBE taxpayer opts out of the simplified depreciation rules, it will use Div 40 to claim depreciation deductions in respect of newly acquired assets.

The SBE will not be able to claim IAWO deductions under s. 40-82. This is because the provision only applies to MBEs and LBEs.

However, the SBE may be able to utilise the temporary investment incentive (accelerated depreciation) in s. 40-120 of the IT(TP) Act. Subject to certain conditions, businesses with aggregated annual turnover of less than $500 million may deduct 50 per cent of the cost of an eligible new asset, where the entity first used or had the asset installed ready for the use for a taxable purpose between 12 March 2020 and 30 June 2021.