On 12 July 2018, the ATO published the income tax gap for ‘individuals not in business’, comprising around 9.6 million individuals who are not in business and earn income from salary and wages and investments. The estimated net tax gap for these individuals in relation to the 2014–15 income year is 6.4 per cent, or $8.7 billion. The ATO claims that this tax gap is ‘primarily driven by incorrectly claimed work-related expenses’.

The ATO defines the tax gap as:

… the difference between the estimated amount of a liability or obligation theoretically payable and the amount actually reported to, or collected by, the ATO over a defined period. The gap includes amounts that are incorrectly reported, as well as amounts that [the ATO does] not expect will ever be paid.

The latest tax gaps reported by the ATO include:

ATO analysis shows the main components driving the total net tax gap of 6.4 per cent ($8.76 billion) for individuals not in business include:

How the ATO measured the individuals not in business gap

The ATO reviewed the tax returns of a random sample of taxpayers, and then applied the results to the broader population. The ATO also used operational data including results from compliance activities on risk areas.

The ATO randomly selected a sample of individuals. People in the sample who were identified as low risk were not investigated further. The remainder of the sample progressed to an audit (i.e. the REP).

Of the total 2,388 adjustments made, 51 per cent (or 1,212) were for work-related expenses. The ATO has reported in a media release that common mistakes include:

The ATO has expressed concern that a minority of tax agents are exaggerating or falsifying claims to attract or retain clients. The ATO will work alongside the Tax Practitioners Board (TPB) to identify and closely monitor these agents.

How the ATO is addressing the gap

To address the individuals not in business gap, the ATO is taking a two-fold approach to:

The ATO’s key initiatives to reduce the individuals not in business gap include:

In the 2018–19 Federal Budget, the Government announced additional funding of $130.8 million for the ATO to increase compliance activities targeting individual taxpayers and their tax agents.

The extra funding will allow the ATO to — amongst other initiatives — increase its focus on reducing the key drivers of the gap, including work-related expenses.

The ATO will improve services for tax agents who are willing to do the right thing. However, the ATO has warned that, with the additional Government support, it will also increase action against tax agents who deliberately and repeatedly seek to undermine the tax system. It will be looking not just at the returns of their client base but also their own business and personal affairs.

This year, the ATO expects to undertake over one million interactions with taxpayers and tax agents claiming work-related expenses. These interactions will encompass everything from help and education through to reminders, reviews and audits.

As part of the educational aspect of its campaign for Tax Time 2018, the ATO has released some useful and colourful fact sheets relating to claiming various types of work-related expenses, and some fact sheets tailored for taxpayers in specific occupations.

The fact sheets can be downloaded here.

Methodology behind the tax gap

Why does the ATO measure the tax gap?

The ATO estimates and publishes the tax gaps for several key reasons:

The tax gaps are grouped into three programs of analysis: 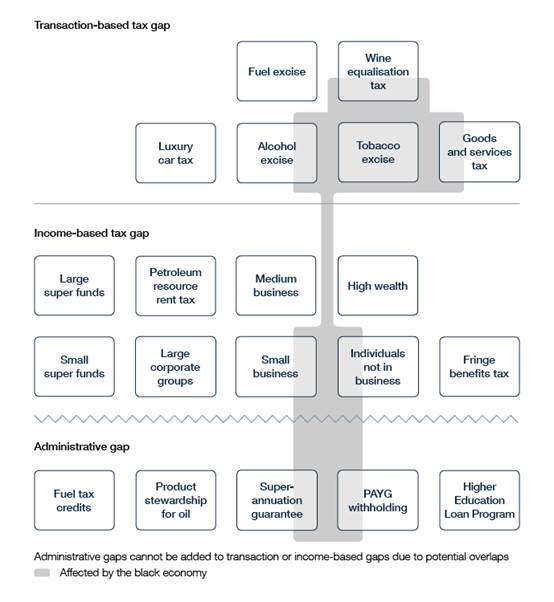 Input from stakeholders and experts

In developing its tax gap estimates, the ATO engages key stakeholders and subject matter experts within the ATO and the community. These include tax gap experts, researchers, academics, government agencies and taxpayer representative groups.

In 2013, the ATO established an independent expert panel to provide advice on the suitability of the gap estimates and methodologies. The panel currently comprises two economists and a tax professional, all of whom also hold academic roles.

How the ATO measures the tax gap

The ATO’s tax gap estimates aim to quantify the level of non-compliance across the ‘four pillars’ of compliance:

Where possible, the ATO also estimates the amount of revenue not collected from those who do not register or lodge.

There are two measures of the tax gap:

2. The net gap is the difference between:

The estimates reflect the gap in compliance with the law and the administrative approaches at the time. Estimates do not include tax forgone as a result of policy decisions (which are ‘tax expenditures’ dealt with by the Treasury). Gap estimates include tax evasion, fraud, incorrect reporting, non-payment of liabilities, non-registration and non-lodgment. They exclude penalties and interest.

The ATO uses a combination of methods to estimate tax gaps. Generally, data availability and data quality are the key deciding factors for the approach used. All gap estimates are assessed for reliability against a set of ten standard criteria by the independent expert panel.

The ATO’s tax gap measurement and methodologies draw on the experience of overseas tax administrations:

Further, the European Commission (EU) identifies the value-added tax (VAT) gap in each of its 28 member countries. The International Monetary Fund (IMF) provides support to jurisdictions in estimating tax gaps.

The ATO shares its tax gap information with HMRC and the IRS.