The ATO has released long-awaited draft guidance on its proposed compliance approach to the allocation of professional firm profits. The preliminary guidance is contained in the draft Practical Compliance Guideline PCG 2021/D2 (the draft Guideline). The ATO...

The ATO has recently published a number of fact sheets in relation to Single Touch Payroll (STP) changes which will take effect on 1 July 2021. Small employers will commence to report for closely held payees, and the quarterly exemption for micro employers...

A timely change to the FBT car parking exemption rules

Background Car parking on site for employees is a commonly provided benefit — often provided perhaps without any thought to the FBT consequences. Whilst previously this inattention may not have mattered, a recent preliminary change in the ATO's position, on...

In wrapping up the Autumn session of Parliamentary sittings, the Senate adjourned at 8.17 pm on Thursday 28 June 2018 until Monday 13 August 2018. At the close of Parliament, surprisingly and disappointingly, the backlog of highly anticipated tax bills was not passed by the Parliament.

Accordingly, a number of key tax measures remain before the Parliament — some of which have commencement dates which have already passed. The next Parliamentary sitting is from Monday 13 August to Thursday 23 August 2018 (excluding Friday 17 August).

The raft of unenacted tax measures is discussed below, but first it is important to comment on two tax measures announced in the 2018–19 Federal Budget that were passed during the most recent Parliamentary sitting.

This Act contains amendments to:

The Government’s Bill was passed by both Houses in its entirety as a single package. Members of the Senate had initially introduced amendments opposing elements of the personal tax cuts package. The House of Representatives disagreed to the Senate amendments and the Senate subsequently passed the legislation without its proposed amendments.

The effect of the enacted personal income tax cuts is summarised in the following table: 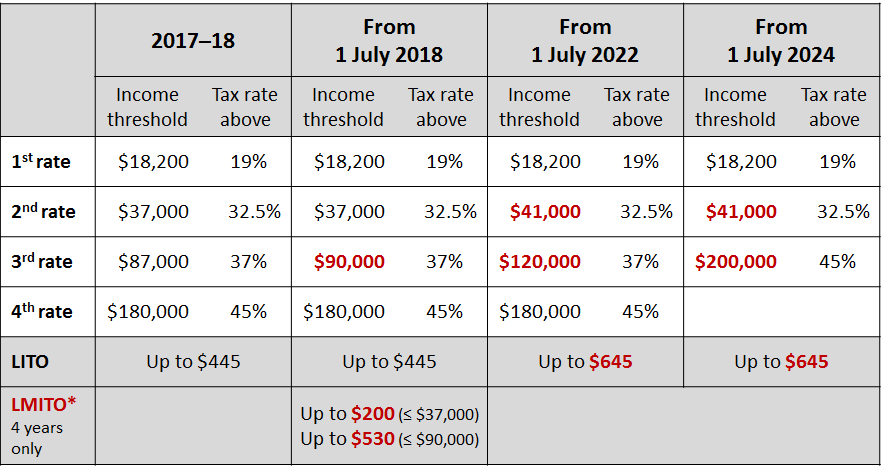 This Bill proposes significant changes to the definition of ‘Base rate entity’ (BRE) for the purposes of determining whether a company is eligible for the lower corporate tax rate from 1 July 2017. The Bill also proposes to amend the conditions which determine a company’s maximum franking rate for franked dividends paid from 1 July 2017.

As the Bill remains before Parliament, and there is now concern about whether the Government can obtain support for this Bill when Parliament resumes, the ATO has advised TaxBanter that it will be advising taxpayers to lodge 2018 company tax returns on the basis of the current law, and that it will not be dedicating compliance resources to this issue.

So how should I lodge the 2018 company tax return?

This means that a company is subject to tax at the rate of 27.5% for the 2017–18 income year if the company is a BRE under existing s. 23AA of the Income Tax Rates Act 1986 which requires the company to:

TR 2017/D7 — titled When does a company carry on a business within the meaning of s. 23AA of the Income Tax Rates Act 1986? — therefore remains relevant to this conversation, despite remaining in a draft form.

What about the franking rate?

Where to from here?

TaxBanter has also suggested to the ATO that if the Bill is delayed much longer, the start date should be deferred from 1 July 2017 to 1 July 2018 because it would be unreasonable to change the law retrospectively once 2018 returns have already been lodged.

We keenly await the fate of this Bill.

This Bill proposes to extend the corporate tax cuts and franking changes — already legislated for companies with an aggregated turnover below $50 million — to companies with aggregated turnover of $50 million or more from the 2019–20 income year. This Bill failed to pass the Senate on Wednesday 27 June, and the Government will continue to try to secure support for the Bill later this year.

This Bill proposes amendments to the small business CGT concessions in Div 152 of the ITAA 1997 to include additional conditions that must be satisfied to apply the concessions where a CGT event happens to shares in a company or interests in a trust, with effect from 1 July 2017.

Senator David Leyonhjelm, on behalf of the Liberal Democratic Party, and Senator Doug Cameron, on behalf of the Opposition, have both proposed an amendment to delay the commencement date from 1 July 2017 to 8 February 2018, the date on which The Treasury released the exposure draft legislation for comment.

This Bill remains before the Senate, and while media reports have indicated that the Government will accept the amendments to delay the start date to 8 February 2018, there remains for now uncertainty in preparing 2018 tax returns where the CGT event for affected transactions has occurred between 8 February 2018 and 30 June 2018.

This Bill proposes a one-off 12-month Amnesty — from 24 May 2018 to 23 May 2019 — which allows employers to self-correct any unpaid superannuation guarantee (SG) amounts dating back to 1 July 1992. Part 7 penalties and the $20 administration component (per employee per quarter for which there is a shortfall) will not be applied and any catch-up SG payments will be deductible.

As this Bill will not be considered again by the Parliament until Monday 13 August 2018 at the earliest, employers will be three months into a 12‑month Amnesty without any certainty as to whether any disclosures made to the ATO since 24 May 2018 are covered by the amnesty or whether catch-up SG payments made with those disclosures will be treated as being subject to full penalties and non-deductible under the current law.

The ATO provided the following advice to employers on 8 June 2018:

The deductibility and removal of the administration component proposed in the Amnesty depend on the passage of legislation. Until this occurs, the current law applies.

… The Part 7 penalty is automatically imposed at 200% of the SGC amount which may be partially remitted. In determining any remission of the penalty, we will take into account the employer’s ability to access the Amnesty.

The Bill also includes measures to avoid inadvertent breaches of an employee’s concessional contributions cap by allowing eligible employees with multiple employers to elect that some wages are not subject to SG for a particular quarter, from 1 July 2018.

An employee may apply for an employer shortfall exemption certificate with the ATO if they are likely to exceed their concessional contributions cap for the financial year that includes the relevant quarter (i.e. where their income exceeds $263,157). Any employer that is covered by an employer shortfall exemption certificate will not be liable for the SG charge if they do not make contributions on behalf of their employee for a quarter covered by a certificate.

It is expected that for the first quarter of the 2018–19 financial year, the Commissioner will defer the due date for all applications to allow employees time to apply for an exemption following the commencement of these amendments.

Mindful of the due date for SG contributions for the September 2018 quarter being 28 October, and that some employers pay SG contribution more frequently than quarterly (such as monthly), we keenly await the fate of this Bill.

This Bill extends Single Touch Payroll (STP) reporting from 1 July 2019 to small employers (those with fewer than 20 employees as at 1 April 2018).

The Bill also proposes other STP reporting changes, relating to SG amounts, from 1 July 2018 for substantial employers (those with 20 or more employees as at 1 April 2018). The Bill:

The delay in the passage of this Bill has created uncertainty for SBEs planning the timing of significant depreciating asset purchases from 1 July 2018.

This Bill denies the main residence exemption (MRE) to individual taxpayers who are non-residents for tax purposes at the time of the CGT event. This measure applies to CGT events happening from 7.30 pm (AEST) on 9 May 2017. However, where the dwelling was held just before that time, the proposed amendments will not apply if the CGT event occurs on or before 30 June 2019.

The proposed measures will have a significant impact on Australian taxpayers who become ‘expats’ and non-residents for tax purposes then sell their family home. Under the proposed law, access to the MRE will be based on whether the taxpayer is a non-resident at the time of the CGT event and has no regard to the taxpayer’s prior period of tax residency while they owned the property or any period of occupation of the property.

Accordingly, no partial MRE would be available, meaning the new law is proposed to have retrospective effect as far back as 20 September 1985, the commencement of the CGT regime.

In May 2018, AustCham Hong Kong & Macau reported that:

To date, the Minister and the Government have not provided any information regarding any proposed amendments to the Bill.

The Bill also proposes to allow taxpayers the choice to self-assess the effective life of certain intangible depreciating assets they start to hold on or after 1 July 2016.

This Bill proposes to extend the taxable payments reporting system (TPRS) to entities that provide courier or cleaning services from 1 July 2018. Currently the TPRS requires businesses in the building and construction industry to report to the ATO payments made to contractors, and government entities to report grants paid and payments made to certain entities.

The Bill also introduces amendments to prohibit the production, distribution, possession and use of sales suppression tools in relation to entities that have Australian tax obligations, with effect from the day after Royal Assent.

Senator Doug Cameron, on behalf of the Opposition, has circulated proposed amendments to require a review of the sales suppression tools changes to be conducted two years after Royal Assent.

TaxBanter is offering a tailored 1 hour online training session in which our expert trainers will guide your firm through the practical application of the JobKeeper package to your clients’ businesses.

Who is this session designed for?

Coverage of the JobKeeper package will take place in your next scheduled training session. If you require training sooner, please contact us immediately to schedule an additional JobKeeper session ($770 per firm).

All sessions will be supported by comprehensive JobKeeper training material.

For any other quesions, please call us at 03 9660 3500 or email us at enquiries@taxbanter.com.au to discuss how we can assist you.