The legislative journey of the personal tax cuts

The changes introduced by the 2019 Act, which take effect from 2018–19, build upon and modify the Government’s previously legislated Personal Income Tax Plan (‘the original Plan’). The Plan was codified in the Treasury Laws Amendment (Personal Income Tax Plan) Act 2018, which received Royal Assent on 21 June 2018 as Act No. 47 of 2018 (the 2018 Act).

On 2 April 2019, the Government announced further tax relief for individuals from the 2018–19 income year as part of the 2019–20 Federal Budget (‘the proposed Plan’). Broadly (details are set out below), this will be delivered in three stages:

In the lead-up to the Federal Election held on 18 May 2019, the proposed Plan became a key feature of the Government’s re-election campaign. Rather than seek to enact the further tax cuts before the election, the Government intended to take the proposed Plan to the election. Due to the timing of the election, the Government was unable to introduce the promised legislation into Parliament in time for it to be passed by 30 June 2019. This was because the 46th Parliament did not commence until 2 July 2019 — i.e. after the last day of the 2018–19 income year during which the increase in the LMITO was intended to take effect.

Passage of the Bill through Parliament

Labor initially opposed stages 2 and 3 of the original Plan and vowed if elected to government to unwind the already enacted tax cuts scheduled to take effect from 1 July 2022 and 1 July 2024. However, following the election, the Opposition subsequently reversed its position and indicated that it supported stages 2 and 3 of the original Plan. Labor further indicated that it also supported stages 1 and 2 of the proposed Plan.

Just prior to the resumption of Parliament, while the Government now had bipartisan support for the first two stages of the proposed Plan — which provides targeted relief to low and middle income taxpayers — Labor remained opposed to the third stage, which provides a tax cut for those on higher incomes up to $200,000.

In particular, the Opposition was conditionally willing to support the package if the Government:

However, the Government was unwilling to split up or modify its package which it had taken to the voters.

To pass the Bill in the Senate, the Government — which holds 35 of the 76 Senate seats — required the support of either the Opposition, or at least four of the six crossbench senators.

By the evening of Thursday 4 July 2019, the Opposition ultimately supported the Bill in its entirety, after its proposed amendments failed, as did Centre Alliance (Senators Stirling Griff and Rex Patrick) and Senator Jacqui Lambie (Jacqui Lambie Network). The Bill was passed with 56 votes to 9, with the Australian Greens senators casting the opposing votes. The two One Nation senators (Pauline Hanson and Malcolm Roberts) abstained from voting and Cory Bernardi (Independent) was absent. 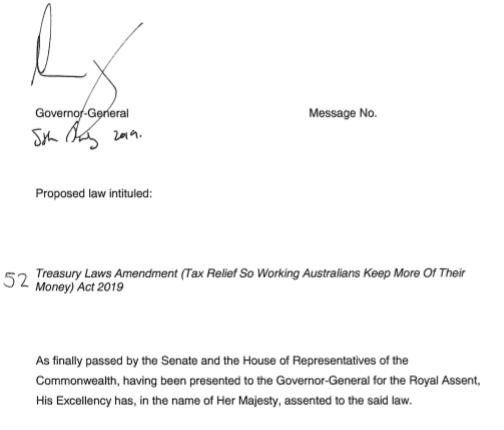 Below are two tables setting out the previously legislated and the newly enacted rates, thresholds and LMITO/LITO from the 2018–19 income year. The 2017–18 information has been included for comparison. 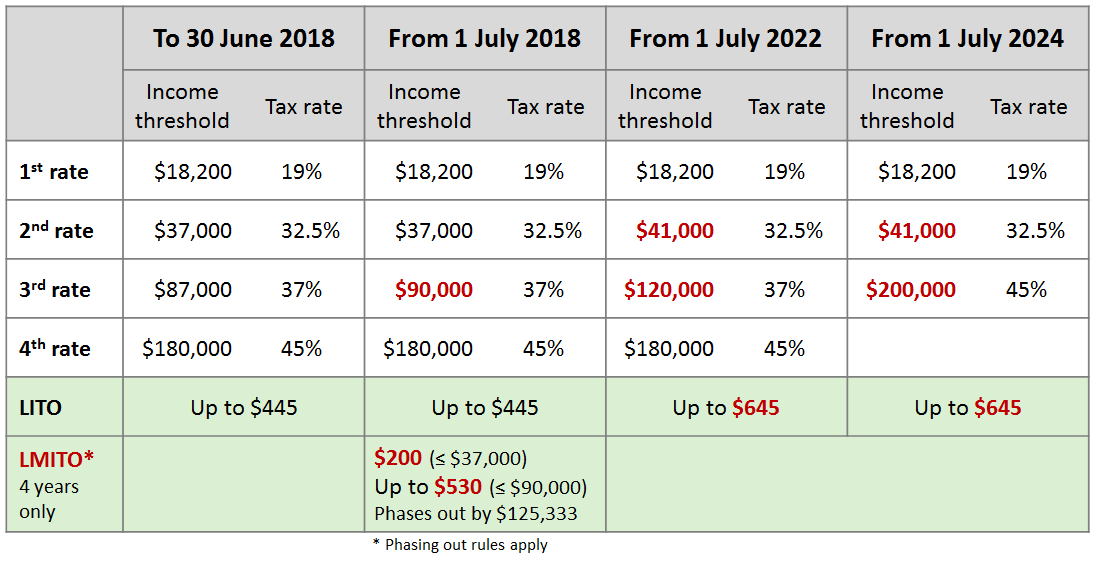 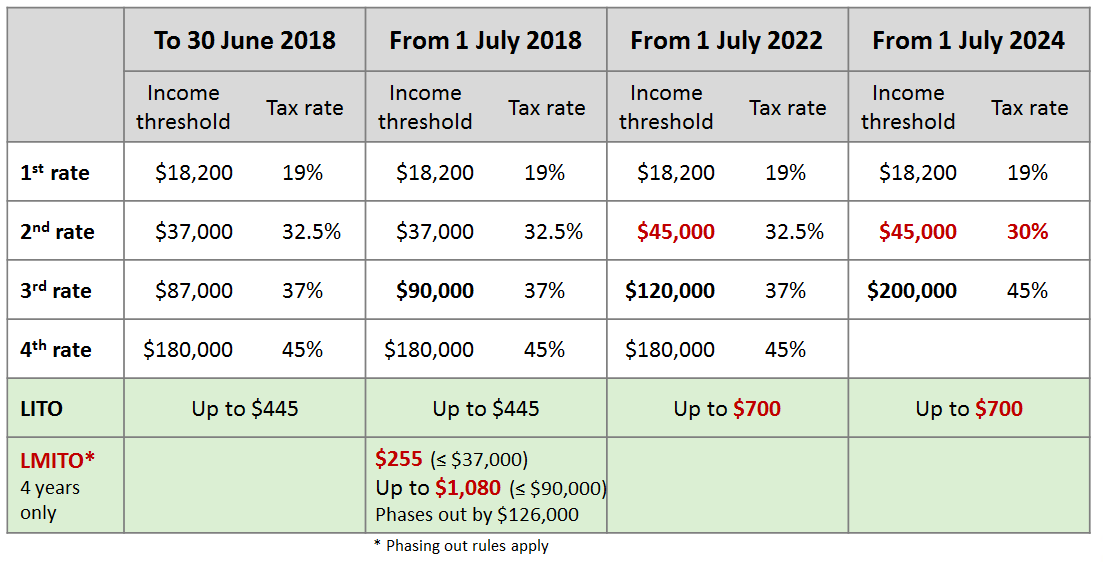 How much tax relief will taxpayers receive?

The following tables compare the income tax consequences of the latest changes for five taxpayers on different taxable incomes in each of the 2018–19, 2022–23 and 2024–25 income years (i.e. the first year in which each of the three stages of the 2019 Act take effect).

The ‘Benefit’ column illustrates the amount by which each taxpayer is better off under the newly enacted law as compared to the previous law before the 2018 amendments were enacted.

The analysis does not take into account the Medicare levy, the various higher education loan repayment schemes or other personal tax offsets.

Note
The tax benefit of $1,080 provided to the taxpayer earning $50,000 in this case represents the full LMITO.

Immediate relief for 2019 — the LMITO

The following table sets out the LMITO that taxpayers in different income bands may expect upon lodgment of their 2019 tax return.

Readers should note the following points about the increase in the LMITO:

How will the ATO administer 2019 tax returns?

In April 2019, the ATO confirmed that — as expected — it could not issue assessments based on the new tax rates until the law is enacted. On 5 July 2019, once the 2019 Act became law, the ATO issued a statement to clarify how it intends to administer the new LMITO.

The ATO is implementing the necessary system changes so taxpayers who have already lodged their 2019 tax return will receive any increased entitlement to the offset. Any tax refund will be deposited in the taxpayer’s nominated bank account.

For tax returns already lodged, the ATO expects to begin issuing refunds towards the end of the second week of July, which is in line with the normal processing of refunds for this time of year.

Taxpayers who are yet to lodge their tax return will have any entitlement to the offset taken into account during the normal processing of their return.

Critical Point
Taxpayers (or their tax agents) who already lodged their tax returns before the law was enacted do not need to request an amendment to their assessment.